This is something I was a little hesitant to do, but I was thinking of launching another story (which a sequel to another series) on this website after I finish World War 3: The Hit on The Innocent.  This one follows a different storyline from a different series, called The Monster Attacks: The Series.  This one is about a scenario where genetically mutated animals are used as biological weapons against humanity.

The story is called The Monster Attacks 4 and, well, it's inspired by the new Godzilla movie, as well as other monster movies I've seen\heard of in the past few years of my childhood\teen years.

Here's what I have in mind for characters (NOTE: the screens are from the trailer for Godzilla)

These creatures are from a variety of different monster movies I've seen\heard of in my child hood and teen years.

Entelodon, a giant "Terminator Pig" with an omnivorous diet that lived from the late Eocene to early Miocene epochs 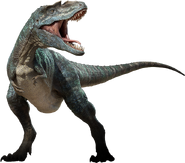 Gorgosaurus (C'mon, we all know this dinosaur)

DILOPHOSAURUS (from Jurassic Park, as you all know)